Last month I saw an intriguing article on creating a Z80 CP/M Emulator on my favorite device - the ESP8266 on hackaday.io.

My first real computer was a dual processor 6502 / Z80. That was a bit of a misnomer, as one could not actually use both them at the same time. This was a "Basis 108" Apple II compatible from West Germany: A behemoth of a computer in an awesome cast aluminum case. Essentially the "second" processor was the Z80 add-on board but built-in to the motherboard. The thoughts of revisiting my old friend CP/M was too hard to resist.

I used my existing Build-ESP8266 project on a Raspberry Pi, originally created to ease compiling of MicroPython:

As this script downloads and recompiles everything needed for the ESP8266 toolchain, it was a simple matter to adapt for this Z80 CP/M project.

I only needed to adjust one value in the ./cpm8266/code/Makefile

I also had the ESP8266 toolchain installed in slightly different locations. Fortunately everything was parameterized in environment variables. So when using my Build_ESP8266 script the values are:

I added these items to my doPathLink.sh (be sure to run with source command):

From their instructions, I only needed add a few additional items not covered in my Build_esp8266.sh script:

After that, a quick compile and upload via "make full" and voila! A working CP/M emulator, shockingly easy! 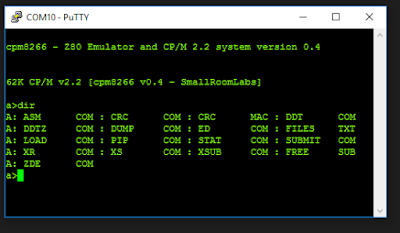 Many thanks to the SmallRoomLabs folks - this is an awesome project! Seeing a CP/M prompt in a putty window is unbelievable!
Now I wonder if I can get WiFi working from CP/M....